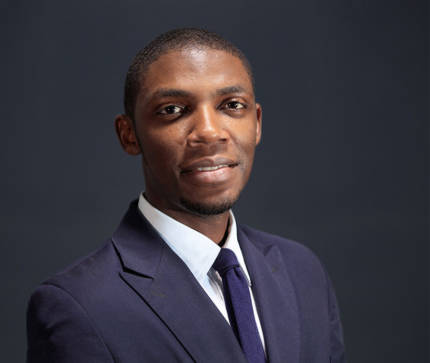 Freddy Mooh is a Senior Associate in the Firm.

Prior to joining the firm, Freddy Mooh worked at Deloitte & Touche Cameroon, where he was involved in assignments to write off bad debts of banks.

He also worked at the Cameroon Oil Transportation Company (COTCO) and the Bank of Central African States (BEAC), in the National Directorate of Cameroon, where he notably evolved in the General Secretariat of the National Credit Council.

Freddy Mooh is fluent in French and English.

a Master’s degree in Business Litigation and Arbitration,

a Bachelor’s degree in Law and Political Science from the Catholic University of Central Africa in Yaoundé.

Freddy Mooh has been involved in the following operations:

The Republic of Cameroon’s Eurobond through the issuance of an international bond, the redemption of an existing Eurobond and the early unwinding of a foreign exchange hedge for a final amount of CFAF 450 billion (2021);

The financing and refinancing of CFAF 3,64 billion by Société Générale Cameroun for the construction of two Carrefour shopping centres in Douala and Yaoundé (2019);

The bond issue of the State of Cameroon for an initial amount of 150 billion CFA francs, closed at 200 billion CFAF (2018).

He has co-authored the following articles:

Increase in the share capital of insurance companies in the CIMA zone, Flora Wamba and Freddy Mooh Edinguele, Lexbase Afrique-OHADA, No. of November 29, 2018;