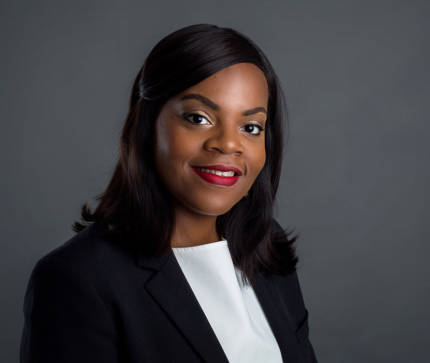 Aurélie Chazai is a member of the Cameroon and Paris Bars and is the Managing Partner of the Firm.

Aurélie Chazai was an associate in the Paris office of the English law firm Ashurst LLP before joining the Paris office of the American law firm Cleary Gottlieb Steen& Hamilton LLP in 2014. During her experience, she had the opportunity to work on the corporate and financial aspects of numerous transactions in Europe and Africa (particularly in OHADA member countries).

Aurélie Chazai has also worked at the law firms Willkie Farr & Gallagher LLP, Herbert Smith Freehills LLP, Linklaters LLP, CMS Bureau Francis Lefebvre and Ernst & Young in Paris, as well as in the stock market and financial law department of the asset management company AXA Investment Managers. She was a lecturer in banking law at the University of Cergy Pontoise (France) from 2012 to 2013.

She is fluent in French and English.

a Master’s degree in Financial Law from the University of Paris I Panthéon Sorbonne,

a Master’s degree in Business and Tax Law from the University of Paris I Panthéon Sorbonne/HEC Paris,

as well as a Master’s degree in Tax Law and a Bachelor’s degree in Private Law from the University of Paris I Panthéon Sorbonne.

Aurélie Chazai was involved in the following operations:

The Republic of Cameroon’s Eurobond through the issuance of an international bond, the redemption of an existing Eurobond and the early unwinding of a foreign exchange hedge for a final amount of CFAF 450 billion (2021);

The financing and refinancing of FCFA 3,64 billion by Société Générale Cameroun for the construction of two Carrefour shopping centres in Douala and Yaoundé (2019);

The bond issue of the State of Cameroon for an initial amount of CFAF 150 billion, closed at CFAF 200 billion (2018);

The Republic of Côte d’Ivoire’s dual-tranche Eurobond ($1,25 billion and €625 million) listed on the Luxembourg Stock Exchange and its concurrent offer to repurchase $750 million of existing bonds (2017).

She has also published the following articles: