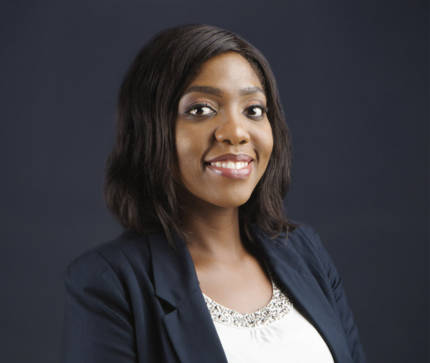 Lawyer at the Cameroon and Nigeria Bars, Aurélia KAMGA is a Senior Associate in the Firm.

Before joining the Firm, Aurelia Kamga was an associate at Abdoul Bagui & Associés.

Aurélia KAMGA previously worked at the Institute of Community Law (IDC), in Abidjan – Côte d’Ivoire, as a legal officer in charge of programs where she planned, organized and set up projects and programs related to training in community law.

She also worked at the Arbitration Centre of the Common Court of Justice and Arbitration (CCJA-OHADA) where she gained experience in arbitration.

She is the representative of the International Chamber of Commerce Paris Youth Arbitrators Forum (ICC-YAF) for Africa, the Middle East and Turkey. She organizes, presents and participates in conferences around the world to promote Alternative Dispute Resolution among young practitioners and regional integration in Africa. She is also a member of various other professional associations such as the Association for the Promotion of Arbitration in Africa (APAA), the Association of Young Arbitrators (AYA) and the Young International Council of Commercial Arbitration (ICCA).

She is also an Associate of the United Kingdom Chartered Institute of Arbitrators (CIArb), one of the leading professional associations specialising in dispute avoidance and resolution, which provides, inter alia, study and training programmes for arbitrators and mediators.

She is fluent in French and English.

a Bachelor of Laws from the University of Buea.

Aurelia KAMGA has recently been involved in the following operations:

The Republic of Cameroon’s Eurobond through the issuance of an international bond, the redemption of an existing Eurobond and the early unwinding of a foreign exchange hedge for a final amount of FCFA 450 billion (2021);

She has co-authored the following articles: